OK, so there are subjects that nobody wants to talk (or think) about. But I’d like you to join me in the dangerous journey to the core of despair: unemployment. Sure, there are always those who cherish the thought of doing nothing all day and catching up with all the latest gossip or watching the fresh episode of Grey’s-whatever. For those brave enough to admit that such a travesty exists and may-or-may-not lurk somewhere in the future, let’s dive right in: how to detect whether you’re given a break or a long farewell?

As a firm believer in giving the bad news first, here’s what may come our way one depressing day:

Let’s say that you’re a truly amazing worker and you have been a loyal addition to your company for many, many years. However, many of your former coworkers now sit in larger offices, have access to better coffee and their lunch breaks include Spanish tapas and wine. And, yet, you are still behind that huge sad fern in a windowless small room and you are starting to smell like dusty furniture. When you are passed over for promotion again, wake up: it’s never going to happen!

Here are your choices now: you can sit back and relax. Since your job will probably never change you can finally stop pretending that you care about “corporate policy” and what not. Bear in mind, though, that they can still demote you and take away that fern you have actually grown to love.

Still, there’s a possibility that you’re just waiting for the final words which may take the form of:
Hi there John/Judy, so listen, here’s the pickle: you’re fired. No hard feelings, mate/girl, but you must have known that it’s been a long time coming, right? Especially since you “accidentally” copied your behind and sent it as a memo to everybody in the company. Oh, wasn’t you? Still, dude, you’ve got to go.

Naturally, your boss may prefer a tad more conventional way of making you feel like your life is coming to a close. You may, for instance, get a written statement such as this:
Dear John, we regret to inform you that you have been dismissed due to the recent overusing the xerox machine situation.
Provided that you did, in fact, use the xerox machine to make copies of your buttocks, it’s a rather gentle way of saying goodbye.

However, if they were to really punish you for doing something outrageous, here’s what you may get in the internal mail:
Dear John, we regret to inform you that you have been dismissed effective immediately due to the fact that you used office materials to circulate inappropriate images. Please clear your desk as soon as possible.

Phew! We’re pretty much done with the worst case scenarios and we can now dive into more optimistic situations. As we all know, times are tough and many people, despite being reliable little workers, are told that they will have to stay at home and polish their silver for some time before there’s some actual work for them again. It may go like this:
Listen John, we like you very much and you make excellent cappuccino, but the company is downsizing now and we just have to lay off 2 workers and you are one of those happy winners. Congratulations, you may go home now!

Another case of getting the boot is when you happen to do something the company, or society, no longer needs. Let’s say you have been making shoes for kitten for your entire life but due to some kind of a natural disaster, all the kittens are now dead. Yes, it may happen, you never know, it’s a cruel world. In this case, the kitten-shoes maker would be made redundant. 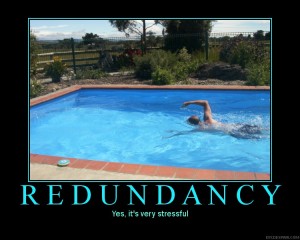 Now, tell me, if you were to find a way to unemployment and all the good time that comes with it, which path would you choose?