Watching even one of the most offensively rerun TV series on Comedy Central may make your language more sophisticated. Tried and tested. Case in point? Frasier, a spin-off of Cheers (Zdrówko), which has won 37 Emmy Awards and was on air for 11 years.

It may seem like nothing more than a silly sitcom about Frasier, a middle-aged, recently divorced psychiatrist living in Seattle with his dad, Martin, a retired cop and his live-in health-care worker, Daphne, who are regularly visited by Frasier’s brother, another openly snobbish psychiatrist, Niles and a rather brash radio producer and Frasier’s coworker, Roz. So what’s so special about Frasier? The language: every character employs completely different vocabulary. You get to learn some British-English, Manchester-originated slang from the ever-peculiar Daphne or some high-brow and, sometimes, somewhat obscure phrases the doctors might have learned in Harvard. At the same time Roz, the queen of witty puns, will teach you the true meaning of the double entendre, while the old Seattle policeman gets straight to the point with his charmingly grumpy antics.

Are you hooked on? In case you need some proof, there you go, you doubtful reader.

Frasier: Well, you see, that’s fine as far as it goes, but this time I want you to do it with a bit more… grandeur. With some majesty and a soupcon of awe. (“They’re Playing Our Song”)

Frasier: No! I find her cousin Jen just a bit judgmental for my taste. Yesterday she told me my show was bourgeois. I pointed out that anything that had mass appeal could be said to be bourgeois. She then said that my argument was bourgeois. Which I found to be jejune. (“Kissing Cousin”)

Niles: Will you look at this crowd? It’s like a Who’s Who of the crème de la crème of the upper crust! (“The Doctor Is Out”)

Niles: Well, I’m here. I forgot to gargle, I’m wearing mismatched socks, and I’m so nervous, I could wet myself.
Roz: Well, at least we have your opening line down.
Niles: You’re going to have to be patient with me, Roz; this isn’t exactly my milieu.
Roz: Okay, let’s make that lesson number one: If you’re going to use words like “milieu,” you might as well show up here with a sore on your lip and a couple of kids. (“Mixed Doubles”)

Frasier: How did things go with Maris?
Niles: I wish I knew. I returned the gifts and told her there was no chance of reconciliation. She didn’t get mad. In fact, she was eerily calm. She just stood there with a blank stare on her face, rubbing her ocelot.
Martin: You know, they got a cream for that. (“Secret Admirer”)

Frasier: Well, it didn’t quite work out the way I planned, but er… Daphne, what are you doing?
Daphne: Fluffing your knickers. If you don’t mind my saying so, you’re losing some of your elasticity. (“Dinner At Eight”)

Niles: Thank you, but those won’t be necessary. I have no cough reflex, and excellent bladder control.
Roz: [sarcastically deadpan] It’s true – all the good ones ARE married. (“Frasier Crane’s Day Off”)

Daphne: Well! Aren’t you a bobby dazzler?
Frasier: Well, I’ll go out on a limb and take that as a compliment. (“Dinner At Eight”)

Martin: Well, you know damn well that’s what this whole thing’s about. I don’t know what the big deal is, if she’s talking too much, just tell her to shut her big bazoo. 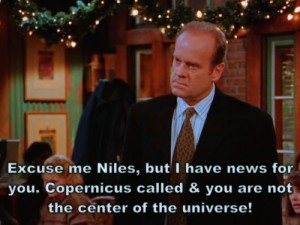 soupcon (French): a small amount of something

crème de la crème (French): the best of the best

bobby dazzler (British-English): someone or something considered remarkable or excellent