There are phrases and words that you simply never want to hear: “you need to cut down on cookies,” “you’re in the red,” “there’s a malignant growth on your buttocks,” being some of them. A phrase that no man in a committed relationship wants to hear sounds much more benevolent, but is just as ominous. Remember the sappy romance written by the ever-sentimental Nicholas Sparks and the subsequent movie starring Channing Tatuum and Amanda Seyfried called “Dear John”? There you go! As promised, it seems just as innocuous as a regular letter opening, but believe me, it’s just the opposite… 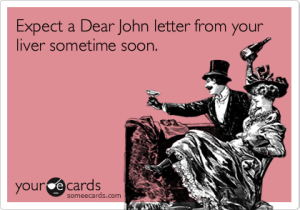 A “Dear John” letter was supposedly a staple in the post that arrived to American soldiers fighting in the Second World War. Imagine all the pin up-like girls of the 1940s growing more and more tired of being alone and of waiting for their uniformed princes to come back. Time went by and sometimes no news of their loved ones’ fate could reach them for months. Not knowing whether it’s because the men forgot about them or died — you may choose which version is less depressing for a 20-year-old girl — the ladies were growing restless to the point of abandoning all hope or getting angry at the distance or, most often, simply found a new prince much closer to home. Since there was no Facebook back then (imagine!), the girls had no choice but to send their lovers letters in which they, regrettably, had to let the men go or just ask them for a divorce. The letters quickly became known amongst the soldiers as “Dear John” letters and one of the first records of such usage is March 21, 1944 St. Petersburg Times article “Hollywood Girls Gain Weight…”: “[a] “Dear John” letter […] is one received by a soldier overseas from his girl, who says she is marrying a 4-F*, or a wife who says she would like to divorce him. It is one of the worst hates in the Army.” As one may deduce, the letters usually started with a “Dear John” phrase, quickly followed by some sort of explanation regarding the reasons of the impending breakup. The Second World War ended, but the phrase remained the same in the American vernacular: “A Dear John Letter”, a country song popular in the 1950s, retold the same story only this time it was about the Korean War and in 2010 Taylor Swift wrote a “Dear John” song which, supposedly, described her fling with the infamous heartthrob John Mayer. It seems 2010 was a “Dear John” year since that was when Amanda Seyfried said postal goodbye to Channing Tatuum as well. Today, the phrase is often used when talking about saying farewell to somebody for good, for example Chicago Now’s journalist has quite recently published her message to Kanye West entitled “My Dear John letter to Kanye West”; not to mention a quite popular “dear john” day cream called “a Movin’ On Facial Cream.” Never before was a divorce that cheap: the moisturizing experience costs about $30.

on the plus and neutral side:

to be in the red: mieć debet, być na minusie